The Cathedral View Apartments are located in Longford Town in the heart of Ireland. The listed buildings are in the elegant surroundings of Keon’s Terrace, on the Dublin Road, opposite St Mel’s Cathedral. Longford lies at a meeting of the N4 and N5 primary roads which lead to many of the major towns and cities of Ireland. The Cathedral View Apartments are a 5 minute walk from Longford Bus and Train Station, approximately 1.5 hours from Dublin Airport and 1 hour from Knock Airport.

Approaching Longford on the N4, take the first exit at the ‘Padraic Colum Roundabout’ and continue towards Longford Town. Proceed through the traffic lights, under a railway bridge and you will notice the copper dome of St Mel’s Cathedral coming into view. Advance with care as you pass a national school on your left. Directly after the school is the gated entrance to the apartments, which is visibly signposted “The Cathedral View Apartments”. Welcome to your destination.

Approaching Longford on the N4 from Sligo, you will reach the ‘Red Cow Roundabout’, take the third exit into Longford. Proceed down ‘The Battery Road’, into Longford Town. Drive through the town, following the one way street system which will bring you onto Dublin Street. At the end of Dublin Street, St Mel’s Cathedral sits majestically on your left. You will proceed straight through the traffic lights, with a colourful Victorian Terrace on your right. This is the front of the Cathedral View Apartments. The gated entrance is at the end of the terrace. You have arrived.

Approaching Longford Town from Athlone on the N63, the one way traffic system brings you to The Market Square. Keep to the left, approaching a junction at “The Market Bar”. Turn left onto Ballymahon Street, merging to the far right lane. You reach a traffic light junction, following the road right onto Dublin Street. At the end of Dublin Street, St Mel’s Cathedral sits majestically on your left. You will proceed straight through the traffic lights, with a colourful Victorian Terrace on your right. This is the front of the Cathedral View Apartments. The gated entrance is at the end of the terrace. You have arrived. 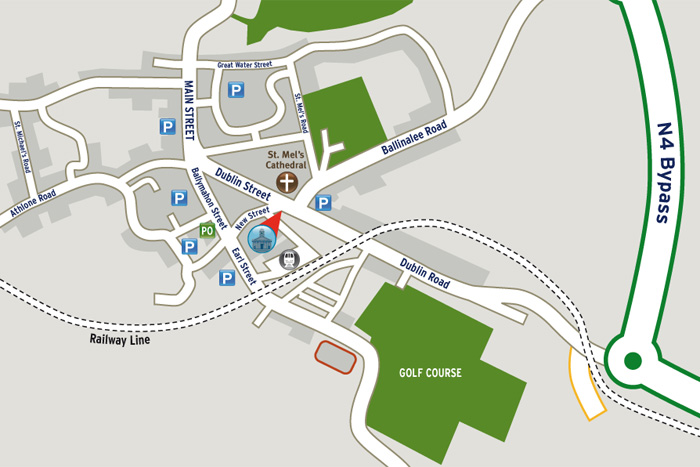 Longford Town (population circa 9,000) is one of the region’s key commercial and industrial centres, and serves a wide catchment area as the primary town in the north midlands region. It hosts all the major Irish banks and is a vibrant retail centre, with five of Ireland’s largest multiples located in the town. Longford has a proud sporting tradition and a wide range of sports and leisure clubs including GAA, rugby, soccer, swimming and tennis clubs and an 18-hole parkland golf course. It hosts one of the finest urban parks in the country at the Mall which apart from beautiful walks, has a 25m swimming pool, gymnasium, two playgrounds and all-weather sports facilities. The Backstage Theatre (capacity 220) is one of the premiere theatre venues outside Dublin, while the town also has a multiplex cinema, greyhound stadium, bowling alley, several children’s indoor activity centres and an array of award winning restaurants.

Longford is a tranquil and mainly low-lying county, situated in the basin of the River Shannon and the upper catchment area of the River Erne. In the heart of the lakelands, it affords the ideal destination for fishing and watersports. Large stretches of bogland, some in relatively pristine condition and distinct to the midlands of Ireland, are a valuable environmental habitat for rare wildlife and provide a unique setting for walking. Steeped in ancient Irish mythology, it also has impressive archeological sites and a wealth of literary and musical tradition. County Longford is host to unique towns and villages, a number of which are regular National Tidy Towns winners. The true beauty of this county in the heart of Ireland lies in its rural charm, offering the visitor a unique experience of authentic Ireland that is hard to find elsewhere. Its accessibility to many of the country’s main towns and cities make it a prime location as a holiday base in Ireland. There are a number of areas of leisure and historic interest across the county and some of the highlights include:

County Longford has several other idyllic villages and towns including Ardagh—an architecturally renowned estate village and several times winner of the National Tidy Towns competition—Newtowncashel, also a winner of the National Tidy Towns competition, Abbeyshrule, Newtownforbes, Ballinalee, Kenagh, Clondra, Legan, and Drumlish, each with their own special character and each offer a quality of life that is long forgotten in many of the more developed counties around Ireland.

Longford Town and County offers a wide range of activities and places to visit. Longford’s accessibility to many of the country’s main towns and cities make it a prime location as a holiday base in Ireland.

END_OF_DOCUMENT_TOKEN_TO_BE_REPLACED

We pride ourselves in offering friendly hospitality, quality, comfort and flexibility. We have a variety of visitors from corporate guests to leisure travellers and families. Please take time to see what our visitors have to say about our apartments.

END_OF_DOCUMENT_TOKEN_TO_BE_REPLACED

Cathedral View Apartments are Failte Ireland approved self-catering apartments set in the elegant surroundings of Keon's Terrace, opposite St Mel's Cathedral. Our stylish apartments offer the higher level of comfort and flexibility. Each apartment has its own private entrance and is decorated in a warm contemporary style.

Follow us on the social medium of your choice — Facebook, Twitter or Instragram — to find out what’s of interest around Longford throughout the year, from sports, arts and theatre events to quick updates on our status.